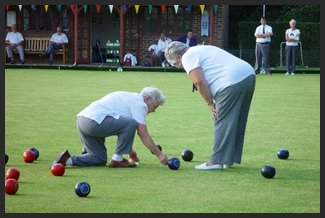 1. The organisation shall be known as the MERMAID BOWLS LEAGUE

2. The management of the League shall be conducted by the OFFICERS and TEAM CAPTAINS or team member nominated by that Captain. A majority of member Clubs will constitute a quorum. Voting shall be one vote per club, in the event of a tie the Chairman will have the casting vote. Voting will be by a show of hands but any club has a right to a secret ballot.

4. The Treasurer shall be responsible for the League’s account at an approved bank. The Chairman and Treasurer will sign all withdrawals.

5. Vacancies occurring in office shall be filled at the Committee’s discretion and any such person appointed shall hold office to the end of season.

6. The League shall hold an A.G.M. every year and as many committee meetings comprising Chairman, Secretary and Treasurer as may be necessary to run the League efficiently.

7. League fees shall consist of a registration fee of £15.00 payable to the League Treasurer before the commencement of each season. (Fees increase from £10 to £15 as from the 2016 season ~ Approved at the 2014 AGM)

8. The League shall consist of mixed teams, a minimum of three ladies or a mixture of ladies and juniors under sixteen (juniors may be male or female), playing matches of four triples to represent each team.

Any new Club who may wish to apply to join the League must obtain the approval by a  majority vote of the existing League member clubs to secure acceptance.

10. Those playing must have been a member of the club they represent for at least one month prior to playing.

11. Under no circumstances may a player play for more than one club within the course of the schedule. If a team does not have a full complement of players ten minutes after the scheduled start of play they will forfeit the two rink points and five shots will be added to the overall score of their opponents.

In the event of inclement weather or impending poor light, Captains may take a mutual decision to dispense with Trial Ends and/or agree to count one shot only on the first two ends. If either Captain was not in agreement, then the normal practice of Trial Ends would apply.

12. Position standings shall be determined on the basis of games won and lost. There will be TWO points per rink won and ONE point for each rink tied. A further TWO points will be awarded to the team with the most shots: a maximum often TEN points per match. Each match shall be contested over EIGHTEEN ends unless each of the opposing competing Captains agree to fewer ends due to unsuitable conditions. TEN ends shall be the MINIMUM played for the match to be valid. If less than TEN ends are played the match shall count as a cancelled match and the points shared. All rink scoreboards will be left in position at the end of the rink showing the final score of that rink until all rinks are finished playing and the match is completed. Skips will keep the scorecard.

(Clarification/Amendment to this Rule added at 2013 AGM.)
If play has to be ended during a game due to inclement weather or the Green becoming unplayable, the Captains to agree on ending the match, if in dispute the final decision is that of the home Captain.

Should this situation arise, all rink scores for the ends completed will count, and the overall result will be determined from these scores. Not all rinks will have to have played the same number of ends.

If ten (10) ends have not been completed, existing Rule 12 applies.

(Amendment to this Rule added at 2016 AGM. THE ONLY REASON TO POSTPONE A MATCH IS FOR INCLEMENT WEATHER AND NOT BECAUSE OF LACK OF PLAYERS.)

14. In the event of a player not being able to continue due to a disability, injury or emergency then, provided TEN ends or more have been played the game on that rink shall cease at the standing score. Should the emergency arise before TEN ends have been played the game shall become null and void on that rink only and the TWO rink points for that rink shall be awarded to the opponents.

In the situation where a player is not able to continue playing due to illness, injury or an emergency, a reserve of either gender may be used at any time. The sub may not take on the position of skip, however the rest of that rink may change their positions. The substitute must be a playing member of the club involved.

Should a team not have a sub available and ten (10) ends have not been completed on that rink the existing Rule 14 will apply.

15. A member may be dismissed from the League or an Officer removed from the League for conduct derogatory to the best interest of the League, deliberate action which can be proven to be detrimental to the best interests of the team or for violation of any League rule. Any complaint against a League member must be in writing and the case will be considered by the officers at a meeting the date of which must be within 7 days of the receipt of the complaint.

16. If at the end of the season more than one team shares the lead, the winner will be the team with the greater of number of shots for. If these are equal, the team with the least shots against shall be adjudged to be the winners. The winning club/team will be presented with the MERMAID BOWLS LEAGUE CHALLENGE CUP to be held for one year. The Winning club/team will also receive a cheque for £50.00 (Fifty Pounds). Amendment agreed at the 2008 AGM :- 2nd Place Team will receive a cheque for £20 and the Third place team a cheque for £10.

17. The usual dress shall be white or Club coloured shirts/blouses above the waist. Tailored grey trousers, shorts or skirts below the waist  (Players are permitted to wear grey knee-length tailored shorts in hot weather.) White, Brown or Grey flat soled shoes to be worn. (Amended at 2014 AGM)

Amendment/Correction to rule 9 (Corrected at 2012 AGM)

(Amendment to Rule 13 added at 2016 AGM. The only reason to postpone  a match is for inclement weather and not because of the lack of players.